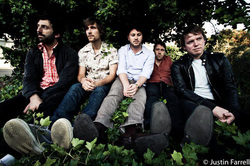 "Shake Well" is the debut album from Sydney 5-piece Ranger Spacey. It's got alt-country honesty and rock n roll intent, and it follows on from their World O' Wire (2009) and They Were Hills (2012) EPs (the latter of which snagged some  J play and pretty great 4 and 5 star reviews from Triple J presenters).
Written and recorded in their hometown of Sydney Australia, "Shake Well" draws on the preoccupations of suburban life, the everyday tension between poetry and banality, tenderness and aggression, apathy and ambition. And the band brings these tensions to life through great songwriting, left-field lyrics and by just playing their hearts out on this record.
"Shake Well" is Ranger Spacey at their restless, relentless best, and it's out now through MGM.
Powered by